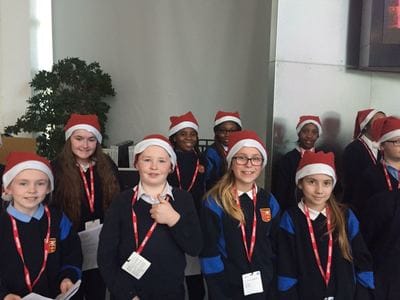 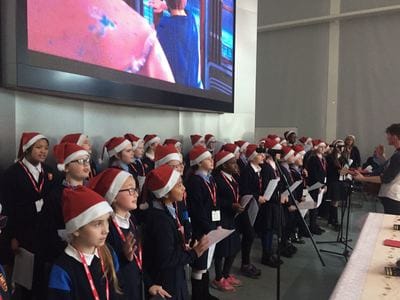 We'd like to give a warm welcome all of our new members.

We have more members now than ever and we are looking for even more.

If you have an interest in music or singing, come to the school hall on Monday at 1:30 and join the club.

Well done to the Music Club who opened the Christmas concert each night. They also sang carols at 'The Mill' shopping centre on Thursday 12th December in aid of The Simon Community. They represented Clonburris really well and entertained parents and plenty of shoppers!  The Music Club raised €500!! Well done to all of the singers from 4th, 5th and 6th and thanks to Ms. Hilliard, Ms. Goodwin and Ms. Donlon for their hard work with the Music Club!

Music in our School

Music plays a huge part in our work in Clonburris N.S. Our Christmas concert is full of singing, dance and music. Children from 3rd-6th can take part in our school choir and they contribute enormously to our Confirmation and First Communion ceremonies! Our Music Club is also very popular (see below for details).

The 'Magic of Music' teacher, Sinéad, has been coming to Clonburris for a number of years and class groups learn songs, play percussion instruments and listen to a variety of music styles during sessions.

During the school year we often bring in outside groups, such as traditional Irish musicians or musicians from other cultures. In recent years some classes have been given the opportunity to learn from samba and percussion teachers. In 2011 a group of 6th class pupils opened the Christmas concert with a rousing percussion set!

Traditional music is played and sung during our annual ceolchoirm for Seachtain na Gaeilge. Pupils in Clonburris learn to play the tin whistle from second class up. Those who learn other instruments are encouraged to join in with music celebrations.

Clonburris Music Club are a group of young music-crazy children who learn and perform together because they love it!

The Music Club's first performance was in November 2012 as part of the school's annual Christmas Concert. In December they put on their own show where parents could hear some of the children's energetic and diverse repertoire.

In March 2013, the children played to a public audience of over 500 people as part of The Corfheile School Choir Festival. The group received high praise from Gabriell McCann (Head of Music Education at Trinity College Dublin). Ms McCann commented on the group's enthusiasm, confidence and onstage energy in particular.

Clonburris Music Club are now under the direction of Ms. Debbie Hilliard and Ms. Clodagh Goodwin. Ms. Donlon will be providing the musical accompaniment. From September 2013, 5th and 6th classes will meet in Room 7 (2.30-3.30 p.m.)

Here's a video of the music club learning the Snow Patrol song 'Chasing Cars'.
Music Club learning 'Cooler than Me'